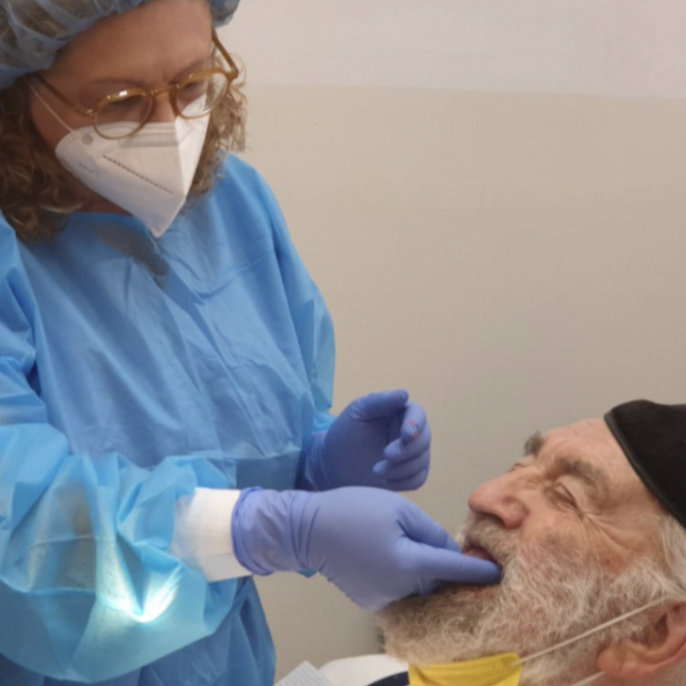 All of the agencies we support are requested to provide us with a yearly report describing the use of the funds we have provided and a general update on the value of the work we are supporting. Below the photos is a portion of the DVI update which focuses on the amazing life of Dr. Yehuda Mendelson and how DVI improved his quality of life by providing him with new dentures. Our Federation is honored to support the good work of DVI in helping people like Yehuda and we thank our community for enabling us to do so.

Dental Volunteers for Israel provides free dental care and oral hygiene education to thousands of at-risk youth and needy elderly in Jerusalem every year, thanks to the benevolent support from our friends and visiting volunteer dentists from around the world.

Pictured above is Dr. Yehuda Mendelson, with a volunteer dentist

Yehuda was born in Russia in 1937, but the family relocated to Belarus. His father was drafted into the Red Army, and miraculously survived the ordeals of combat, being held as prisoner, escaping in time to warn his family of an impending transport, and then rejoining the army. The family, which included his mother, grandmother and baby sister, fled to Kazan. Unfortunately, his sister died during this time. His father’s family was entirely wiped out in the Minsk ghetto. Yehuda’s memories of these tender years concentrated on constant hunger, missing his father and overall fear. After the war, the family returned to Belarus to discover that their home had been destroyed. Yehuda’s father, who had been wounded in battle also made his way back to them and that was the best present little Yehuda could have received. In post-war Russia, life was very difficult. Starvation was a way of life and hopelessness was the pervasive feeling. People received ration cards for bread and Yehuda vividly remembers getting on line in the middle of the sub-zero Russian night and waiting for hours until morning when the bread would be handed out. At daybreak, the thugs would arrive and beat and push the younger and smaller ones like himself, often stealing the ration card and he would return home frozen and defeated. 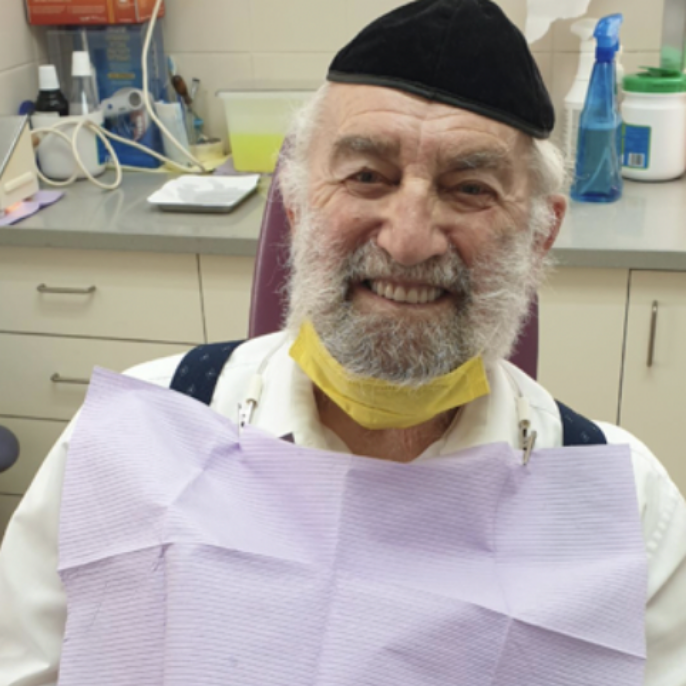 Yehuda grew up and eventually attended medical school in Leningrad. One evening in 1971, Yehuda attended a dance with his friends where he met his future wife, Leah. Leah was not the partying type, and in fact she only went to the dance because she had run out of excuses to give her friends! Requesting permission to immigrate to Israel came with a price in the USSR. Yehuda was immediately dismissed of his medical duties, but an unemployed adult was considered a criminal and could be imprisoned. Yehuda‘s friend was a hospital administrator, and putting his own life in danger, he found odd jobs for Yehuda. When that was no longer possible, he got him admitted to an insane asylum to keep him out of the KGB’s sights. Unfortunately, the process in the asylum was to inject debilitating drugs and thereby subdue and render the patient helpless. Yehuda was in this locked down facility for a month and close to reaching a point of no return. One day he managed to stand on his own two feet and went in search of a fellow doctor. The doctor in charge during that shift was a former classmate and girlfriend who immediately agreed to help him. She took over administering the injections, which she substituted for plain saline solutions instead of the drugs, on condition that Yehuda would continue to behave as if he were receiving the drugs. Miraculously this worked and he was somehow released.

When the holiday of Passover in 1971 arrived, at great risk to themselves, the Mendelson’s secured a package of matzah. While watching her young son and her baby nephew, with the remaining matzah still on the kitchen table a few days after the holiday, there was a strong pounding on the door. It was the police. Terrified, Mrs. Mendelson answered the door and stood in front of the table hoping to avoid them spotting the matzah. They asked if she wanted to immigrate to Israel, not sure what to answer, she meekly said ‘yes.’ The informed her that their paperwork was complete and they should prepare to leave. As Yehuda and Leah said, “This was our personal exodus from Egypt.” Part of the process, however, included rescinding their Russian citizenship which cost a fortune. They took out a loan at the consulate to pay this fee and were warned that they would have to do hard labor in the Negev for twelve years in order to repay the loan. Imagine their surprise when after landing in Israel, they were sent to a hotel in Tiveria and treated as guests rather than laborers. As they said, “May this hard labor never end!” Eventually they moved to a border kibbutz where he practiced as a doctor. He vividly recalls the constant bombings during the 1973 Yom Kippur war. They moved to a kibbutz in the Galil and eventually moved to Jerusalem after his mother was killed in a horrific accident when a train ran over her car. Yehuda simply needed to move far away and put distance between all the memories as every place he went reminded Yehuda of his mother and the tragic loss.

Yehuda has been diagnosed with Parkinson’s disease, however that hasn’t stopped him from helping others. During the pandemic, Dr. Yehuda Mendelson has been teaching traumatized and isolated individuals relaxation techniques, as his medical specialty was hypnosis. He and his wife also enjoy singing karaoke together. As he says, “My revenge against the Nazis is that I have five children, twenty-nine grandchildren and three great-grandchildren. They tried to destroy me physically but instead I survived and multiplied. My revenge against Tzarist Russia, where I was not circumcised, had zero Jewish education, no bar mitzvah or Jewish identity, is that I have become a religious man and established a religious family. They tried to destroy my spirit, but my Jewish sole is thriving and coursing through future generations.”

Yehuda’s dentures are old and no longer fit. He has had them repaired numerous times, but they are in such disrepair that they now cause sores and Dr. Palmon suggested that he use them only for eating until his new dentures are ready. As a result, he has been severely limiting his food intake in order to minimize the oral pain. This naturally brought up all the trauma of his early years where starvation was a sad part of life. Of course, being toothless also affected his volunteer activities because he cannot speak to those isolated individuals without teeth in his mouth and he can’t bear using his old dentures for more than the bare minimum of time required to eat something small. Yehuda is so appreciative that DVI has made new dentures for him! At a follow-up visit, Yehuda was smiling ear to ear. He is now back to helping others who have been traumatized by the extensive pandemic. He also showed us how he has begun to put on some extra pounds as he enjoys his wife’s delicious cooking regularly with his new dentures. As a final thank you, Yehuda and his wife performed a short song for us!