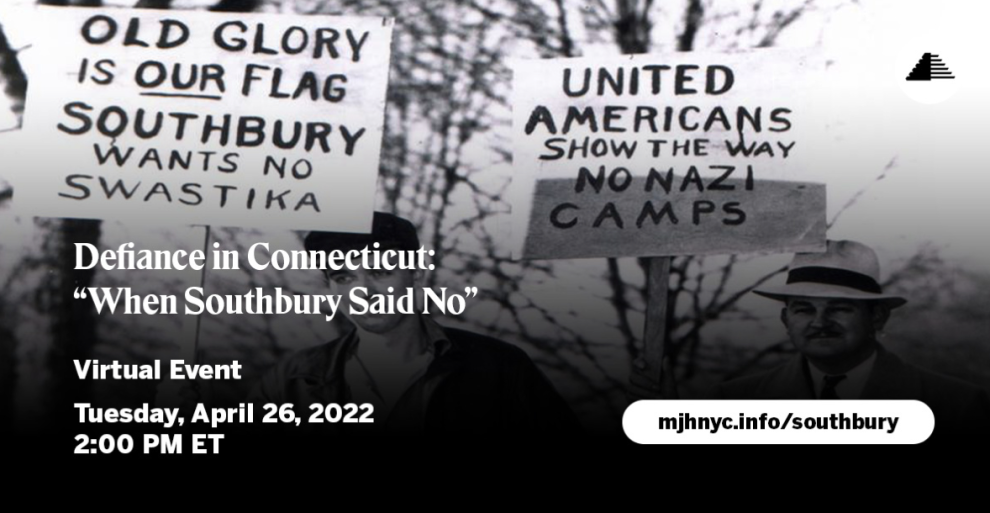 On October 1, 1937, Wolfgang Jung purchased 178 acres of land in Southbury, Connecticut for the German-American Bund to build a Nazi camp. The residents of Southbury fought back against this Nazi invasion of their town. Organized by the Reverend M.E.N. Lindsay, the Reverend Felix Manley, and town leaders, the townspeople established a zoning commission whose first ordinance forbade land usage in the town for “military training or drilling with or without arms except by the legally constituted armed forces of the United States of America.” The ruling effectively closed Southbury to the Bund.
The Museum and the Jewish Federation of Western Connecticut join together to explore this remarkable story. Join us for a discussion between Rebecca Erbelding, historian, archivist,
and curator at the United States Holocaust Memorial Museum; Arnie Bernstein, author of Swastika Nation: Fritz Kuhn & the Rise and Fall of the German-American Bund; and Melinda K. Elliott, president of the Southbury Historical Society, moderated by Rabbi Eric Polokoff, of B’nai Israel of Southbury. The program will be accompanied by a virtual screening of the documentary Home of the Brave: When Southbury Said No to the Nazis. Registrants will receive a private link to stream the film one week before the program.
This program is co-presented by Jewish Federation of Western Connecticut.
A $10 suggested donation enables us to present programs like this one. We thank you for your support.
Register