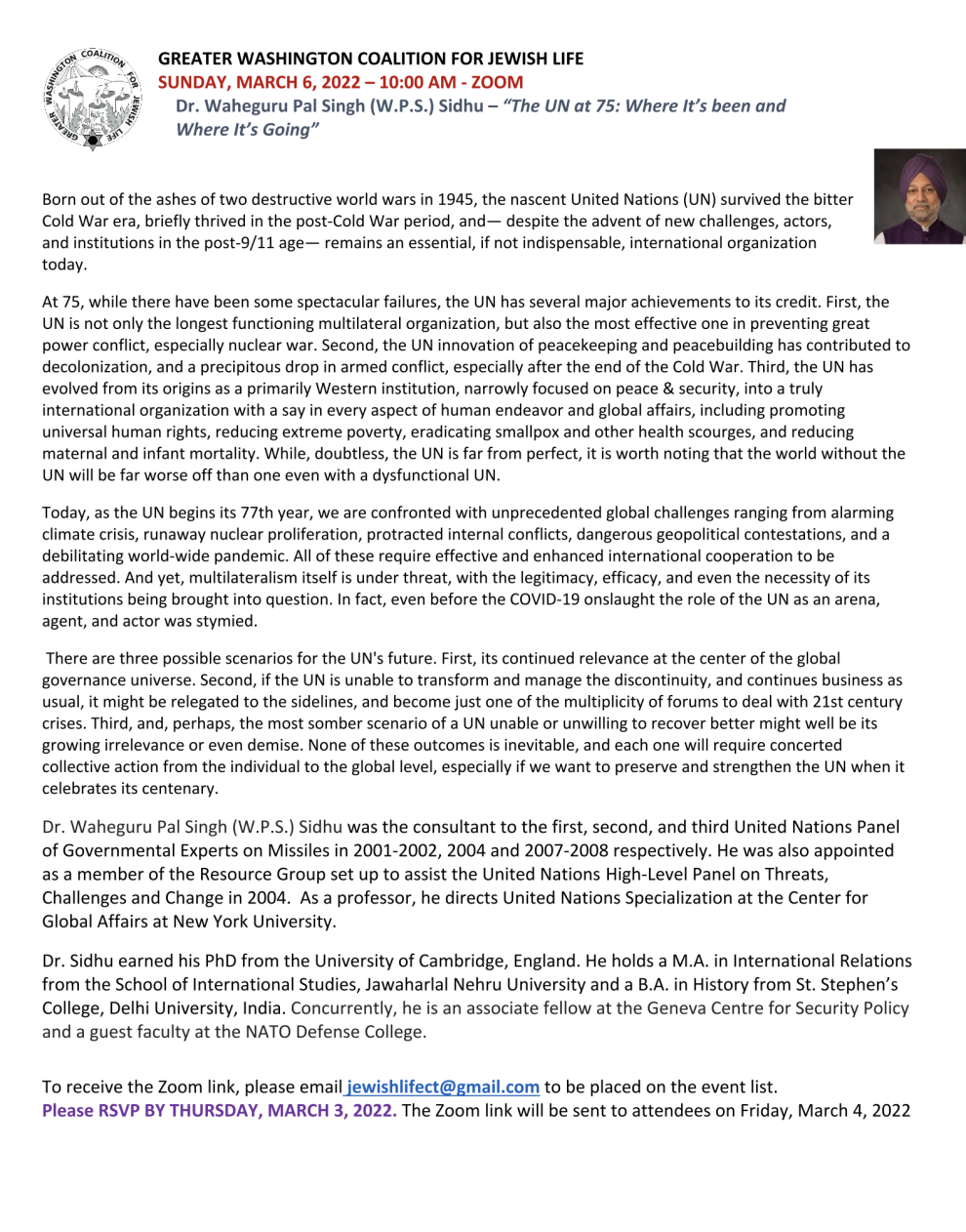 Born out of the ashes of two destructive world wars in 1945, the nascent United Nations (UN) survived the bitter Cold War era, briefly thrived in the post-Cold War period, and— despite the advent of new challenges, actors, and institutions in the post-9/11 age— remains an essential, if not indispensable, international organization today.

At 75, while there have been some spectacular failures, the UN has several major achievements to its credit. First, the UN is not only the longest functioning multilateral organization, but also the most effective one in preventing great power conflict, especially nuclear war. Second, the UN innovation of peacekeeping and peacebuilding has contributed to decolonization, and a precipitous drop in armed conflict, especially after the end of the Cold War. Third, the UN has evolved from its origins as a primarily Western institution, narrowly focused on peace & security, into a truly international organization with a say in every aspect of human endeavor and global affairs, including promoting universal human rights, reducing extreme poverty, eradicating smallpox and other health scourges, and reducing maternal and infant mortality. While, doubtless, the UN is far from perfect, it is worth noting that the world without the UN will be far worse off than one even with a dysfunctional UN.

Today, as the UN begins its 77th year, we are confronted with unprecedented global challenges ranging from alarming climate crisis, runaway nuclear proliferation, protracted internal conflicts, dangerous geopolitical contestations, and a debilitating world-wide pandemic. All of these require effective and enhanced international cooperation to be addressed. And yet, multilateralism itself is under threat, with the legitimacy, efficacy, and even the necessity of its institutions being brought into question. In fact, even before the COVID-19 onslaught the role of the UN as an arena, agent, and actor was stymied.

There are three possible scenarios for the UN's future. First, its continued relevance at the center of the global governance universe. Second, if the UN is unable to transform and manage the discontinuity, and continues business as usual, it might be relegated to the sidelines, and become just one of the multiplicity of forums to deal with 21st century crises. Third, and, perhaps, the most somber scenario of a UN unable or unwilling to recover better might well be its growing irrelevance or even demise. None of these outcomes is inevitable, and each one will require concerted collective action from the individual to the global level, especially if we want to preserve and strengthen the UN when it celebrates its centenary.

Dr. Waheguru Pal Singh (W.P.S.) Sidhu was the consultant to the first, second, and third United Nations Panel of Governmental Experts on Missiles in 2001-2002, 2004 and 2007-2008 respectively. He was also appointed as a member of the Resource Group set up to assist the United Nations High-Level Panel on Threats, Challenges and Change in 2004.  As a professor, he directs United Nations Specialization at the Center for Global Affairs at New York University.

Dr. Sidhu earned his PhD from the University of Cambridge, England. He holds a M.A. in International Relations from the School of International Studies, Jawaharlal Nehru University and a B.A. in History from St. Stephen’s College, Delhi University, India. Concurrently, he is an associate fellow at the Geneva Centre for Security Policy and a guest faculty at the NATO Defense College.

To receive the Zoom link, please email jewishlifect@gmail.com to be placed on the event list.