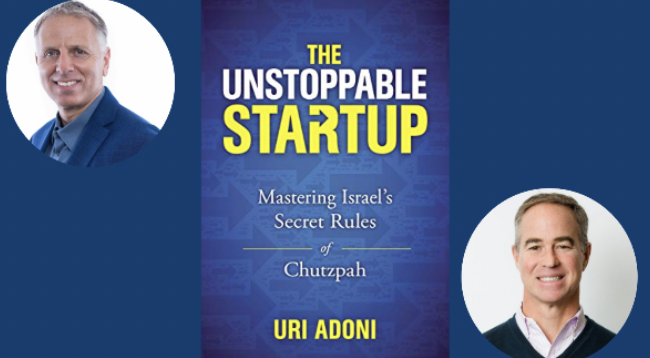 Tune in for a conversation between former CEO of MSN Israel and leading Israeli venture capitalist, Uri Adoni, and Westport’s Cliff Sirlin, managing director of Launch Capital, for an inside look at Israel’s success as a start-up nation.

Uri Adoni has over 20 years in the high-tech world as a ven­ture cap­i­tal­ist at Jerusalem Ven­ture Part­ners – one of Israel’s lead­ing ven­ture cap­i­tals with an impres­sive track record – angel investor, inter­na­tion­al speak­er, and the CEO of MSN Israel (Microsoft Net­works). He was also a com­man­der of a com­bat unit (Major) in the IDF.

As Managing Partner at Launch Capital, Cliff Sirlin has created marketplaces and disrupted supply chains across industries. His businesses have spanned energy, drycleaning, real estate, and publishing. Most recently, he served as the CEO of Domino. As an active investor, Cliff’s investments include Seamless, InVision, Pond5, Living Social, Atlas Obscura, Greatist, Transactis, Big Fuel, and many others. Cliff received his law degree from The New York University School of Law and an undergraduate degree from Colgate University. Cliff lives in Westport with his wife and their two children.

This program is co-sponsored by JFACT (Jewish Federation Association of Connecticut) and the CT-Israel Chamber of Commerce, a new not-for-profit organization that fosters and strengthens trade, business, academic collaboration, and cultural exchange between Connecticut and Israel to benefit the economy and community of each location.